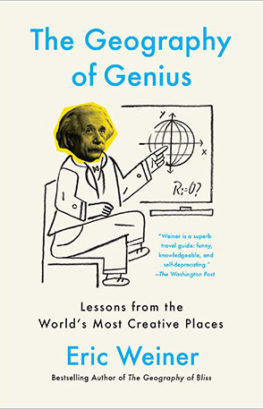 “Review: THE GEOGRAPHY OF GENIUS by Eric Weiner”

What do Plato, da Vinci, Beethoven, and Adam Smith have in common? Sure, they were all innovative geniuses, but each lived in a city in the midst of a creative boom. Coincidence? Eric Weiner doesn’t think so. The author of The Geography of Genius: A Search for the World’s Most Creative Places, from Ancient Athens to Silicon Valley says our ideas about creativity underestimate the importance of place. But how did creative clusters arise in such varied cultures: Renaissance Florence, The Song Dynasty, Edinburgh during the Scottish Enlightenment, Vienna at the times of Mozart and Freud? Was it just dumb luck? Something in the water? How do creative clusters emerge? Why don’t they last? How can we encourage them today? These aren’t trivial questions. (In fact, Weiner says that’s one way creative geniuses distinguish themselves from us ordinary schlubs: they ask better questions). Weiner wants to bust the myth of the creative genius who springs forth fully formed (or after putting in 10,000 hours), working in isolation. What’s most important, he says, is a culture that identifies and nurtures creativity.

Part travelogue, part history, part “science of creativity,” The Geography of Genius is one man’s question for knowledge. It’s also funny, engaging and wry. Weiner studied eight creative cultures—seven historic, one contemporary—devotes a chapter to each, and asks, “Why here?”